On Saturday 3 October 2020, on board the motor ship Virgilio, against the backdrop of the Ducal Palace, in the fairytale city of Mantua, a conference on Tourism of the Roots was held. 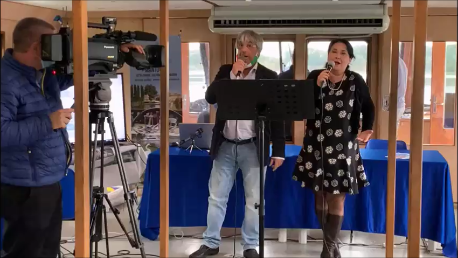 Thanks to the qualified and precious resourcefulness of Daniele Marconici, President of the Mantovani nel Mondo association, and beyond, some speakers discussed the great opportunity for Italy to structure itself to better manage the “Return Tourism” of Italian natives scattered around the world.

The Italian one is not a diaspora, but it is estimated that at least 250 million people worldwide have Italian origins. Even John Fitzgerlad Kennedy claimed that despite being Irish by origin, there were traces of Italy in his family (Fitzgerald in Gaelic means son of Gerald, contraction of the surname Gheraldini, which was a Florentine family).

The interest in Italy on the part of Italian natives is undoubtedly a very strong feeling. It is a bond that starts from the depth of the spirit.

Daniele Marconcini invited some personalities who deal with this topic and who explained how we must prepare ourselves to take advantage of this great opportunity in an optimal way.

The motor ship Virgilio traveled the lakes of Mantua and the Mincio, circumnavigating the city.

Gabriele Negrini, captain of the ship and owner of the river cruise company Andes Negrini, together with Roberta, are working on a tourist navigation project from Trieste to Genoa through the waterways of canals and rivers, especially through the river Po.

During the two hours of navigation Nadine and Marcus sang some songs from the rich  cultured folk and opera tradition, paying homage to the city of Mantua with a piece written for the Gonzagas in the 17th century and with pieces from Verdi’s Rigoletto.

Culture, combined with the pleasure of Belcanto and good food can make a significant contribution to a New Renaissance that we all need.