In our villages of the Lombard Alps it is increasingly rare to see the ancient professions exercised and it will be even more difficult to pass them on. 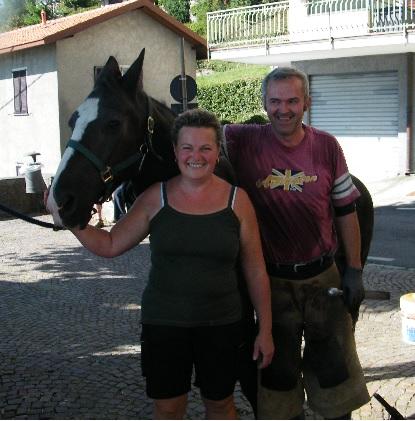 However, when you happen to see the work of a farrier who uses methods faithful to tradition, it becomes a true spectacle of popular culture.

Here in Bologna di Perledo in mid-August 2020, in this small village, in the church square, Ettore Zanchi and his wife Sara wanted to show to a large group of tourists and residents how to shoe a horse.

The first thought that crosses our mind leads us to the western movies that we saw as kids. But here there is no fiction, there is truth and step by step Ettore and Sara gave a real lesson on horses and on the work of the farrier. 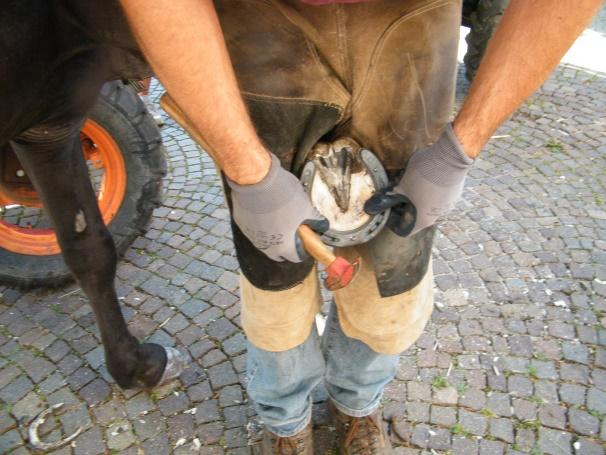 Their lesson was received with great enthusiasm by everyone because, in addition to technical information, it contained all their love for animals and the great passion of respect for nature that they have always had.

But how do you shoe a horse?

As a premise it must be said that shoeing is an operation that must be performed regularly.

How often the shoes have to be changed is decided by those who care for the horse based on the life that the horse leads and the work the horse does.

In this case, Ettore and Sara’s horse, which is called Sisco, is shod every 45 days.

The irons are used to protect the hooves of horses that have to move on different types of terrain, even asphalted ones. The hoof is the heart of the horse and the final part of the paw is very delicate.

First you need to remove the old horseshoe and this happens with an energetic operation carried out with a pincer and irons that remove the horseshoe from the hoof.

Then the bottom of the hoof is fixed.

This is a real manicure or, since they are paws, a pedicure. With irons the lower part of the hoof is cleaned, also cutting, with a special small knife, the superfluous parts, thus reshaping the hoof in the most appropriate and healthier way for the horse.

In doing this one must be careful not to damage the “fettone” which is the upper and central part, in the shape of a V, placed inside the hoof. In this part the blood vessels flow and it is a very, very delicate part for the horse.

The third step is to try on the new shoe. You take a horseshoe of the right number, just like you do with human shoes, you try it on the hoof and then with the help of an anvil and a hammer you model it where it is needed.

On the new iron three cylindrical pins called “widiam”, are applied to the new horseshoe. These serve to prevent the horse from slipping.

Then we proceed with the application of the nails, for Sisco 9 were placed for each hoof. The nails are driven in with a hammer and protrude out of the hoof.

The protruding part is then folded, cut and filed to make it adhere well to the hoof.

The last operation involves the application of a special cream on the hoof to complete the shoeing work.

The operation is repeated for each leg.

In America there is a saying “no hoof, no horse” which means “without an healthy hoof, there is no healthy horse”. This is to say that for a horse having healthy and well-groomed hooves is essential for its health and for protecting the joints of the legs.

Ettore and Sara have 4 horses that they carefully guard as pets. Once a year, however, two of the 4 horses have their moment of worldliness as they pull an old carriage, inherited from Sara’s grandparents, during the historical re-enactment of the “pesa vegia” in Bellano.

Ettore and Sara, here in the village, on a completely voluntary basis, also take care of some fields, regularly cutting the grass and taking care of them. With the depopulation of the village, the abandonment of properties and due to laws that do not allow the authorities to intervene or due to their negligence, Ettore and Sara take care to maintain order and care for nature, where possible.

For this reason we can call them, with the utmost respect, the sheriffs of nature.