Happy in the ashes – Lo spazzacamino

In the Lombard folk song, there is a very particular vein, interesting and rich in history dedicated to the arts and crafts. 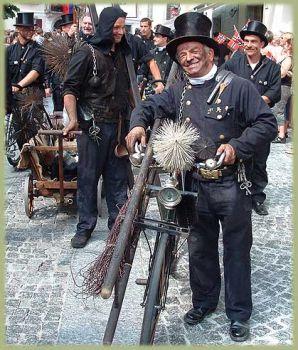 This musical strand of our Folk musical heritage has mainly developed in Northern Italy, since already in the 1800s, many textile, mechanical, foundry factories, etc. had already developed in the area, and the popular song fully described it in many of its facets.

Immediately after the first industrial revolution, which was born in England in the late 1700s and began to develop in Lombardy in the early 1800s, “Northern Italy” was considered the “factory” of the Austro-Hungarian empire that had Milan as vice-capital .

As Nadine & Marcus, a musical group that embraces a very wide repertoire ranging from folk to lyric, we have interpreted several songs in this vein.

Now I’ll tell you one … or better, two … with the same title.

This popular song from the late 1800s, dedicated to the figure of a little man always dirty with soot and coal, describes, in a comical way, one of the most important and useful jobs of those times: the chimney sweep.

In those days the fireplace was used to heat the house, to make food and also as a rubbish dump. As there was no plastic yet, all the garbage could easily be burned.

Keeping the fireplaces clean was therefore essential for everyday safety, that’s why this figure was so important.

The second chimney sweep I want to talk to you about is the figure of Bert, who appears in the 1967 Disney movie “Mary Poppins.”

A verse in the Italian version of this song fully describes its spirit without having to add anything else, the verse says: “You will think that the chimney sweep is in the world at the lowest step. I am in the ashes but yet, there is no one here happier than me”